Why has the City of Sunrise implemented a Road Safety Program?
According to the Insurance Institute for Highway Safety, nearly 2 million crashes annually occur in intersections. In 2009, red-light running resulted in 676 fatalities and 113,000 injuries.

Where are Red-Light Safety Cameras located?
The intersections with camera installations are listed below. Each intersection is marked clearly with signs.

How does the Red-Light Safety Camera work? 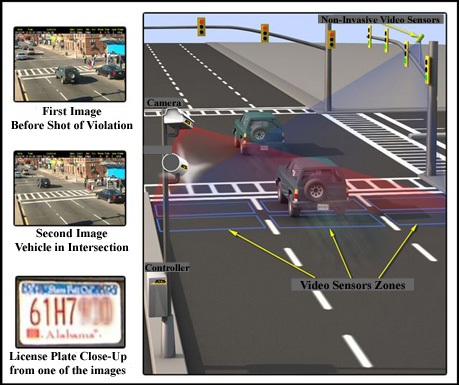 Why does the camera flash when no one runs the red light?
The road safety program is designed to take two rear photographs of a vehicle that may be committing a violation. The first rear image captures the vehicle prior to entering the intersection with the traffic signal red, and the second image shows the vehicle continuing through the intersection during the red signal phase.

The Police Department reviews each violation event captured by the road safety program and makes the final decision to issue a citation. All flash incidents do not equate to a citation.

What to do if you receive a Notice of Violation

How much is the fine?
Violations will be assessed a $158 statutory penalty and no points will be assessed.
If the fine is not paid in a timely fashion a “Uniform Traffic Citation” will be issued and increased penalties could be assessed including court costs.

How much time do I have to pay my Notice of Violation?
It is recommended that the payment be received eight (8) days prior to the due date specified on the front page of this notice to be appropriately processed or a UTC will be issued at a higher cost. The due date for payment is located on the top and bottom right of your Notice of Violation.

What are my options?

To view information about your Notice of Violation please visit www.ViolationInfo.com.  If you do not have access to a computer with internet capabilities, you may view your video and images at the Sunrise Public Safety Building located at 10440 W. Oakland Park Blvd, Sunrise Florida 33351.

Once you have accessed www.ViolationInfo.com, you will be asked to enter your Notice number and PIN, found on the front of your Warning or Notice of Violation in the upper right corner, inside the red box.  For more information about the Intersection Safety Program, you can also call customer service at 1-866-225-8875 between 8:00am and 5:00pm excluding holidays and weekends.

What happens if I ignore the Notice of Violation?
If you fail to respond, a Uniform Traffic Citation (“UTC”) will be issued to you under this statute for the stated infraction you may become responsible for court fees and costs. Upon issuance of a UTC, you shall have the remedies specified in Florida Statutes § 318.14, which include the right to have a hearing before a designated official, who shall determine whether an infraction has been committed. If the official concludes that no infraction has been committed, no costs or penalties shall be imposed.

Will I receive any points on my driving record for this Violation?
This is a non-criminal infraction of state law. No points will be assessed.

I do not believe I ran a red light. Where can I go to view my images and video?
To view video and images, logon to www.ViolationInfo.com and enter the Notice Number and the PIN Number located at the top right of your Notice of Violation. If you do not have Internet access, you may visit any public library for Internet access to view your images.

I do not believe I ran a red light and want to discuss my case with someone.
If you choose to appear before an official of the county court or plead not guilty, do not respond to this Notice of Violation. You will receive a Uniform Traffic Citation within 60 days of the Violation Date via certified mail. Instructions will be provided to you by the county clerk’s office as to how you should proceed.

Can someone other than me attend the hearing?
Only you may appear at an adjudication hearing.

Can I bring a lawyer to the hearing with me?
Yes.

How do I know that these violations are valid?
Images of your vehicle were captured and recorded by an Automated Road Safety Program. You can review your images and video of the actual occurrence online. The images and video were reviewed by several qualified technicians and finally by personnel from the Sunrise Police Department before the alleged civil violation was affirmed and mailed to you as the registered owner or identified driver.

What company provides the Road Safety program in Sunrise?
Sunrise has contracted with American Traffic Solutions Inc. (ATS) which provides Road safety and road safety programs for more than 300 communities across North America. More information about ATS is available at www.atsol.com.

The violation review process emphasizes how every detail is checked, re-checked and checked again by ATS employees and police to ensure that every event captured that results in a violation being issued meets all of the issuing authority's legal requirements. 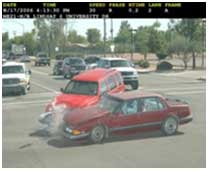 Red-light Running is a Dangerous and Costly Problem.

A Crash Caused by a Driver who Runs a Red Light is More Likely to Result in Serious Injury or Death.

Deaths caused by red-light running are increasing at more than three times the rate of increase for all other fatal crashes.

Most People Run Red Lights Because They are in a Hurry, When in Fact They Save Only Seconds.

Almost all drivers (96%) fear being struck by a red-light runner.


National Safety Council Analysis of Intersection Fatal and Nonfatal Crashes from 2005 to 2009:
Over the last five years, the number and percent of fatal crashes involving red-light running violations have steadily decreased since 2005.

The City of Temple Terrace reports that traffic violations have dropped by 67 percent in the two years since the city began its intersection safety program. Additionally, there have not been any collisions attributed to the intersection safety camera enforcement program since the program’s adaption.

The City of Orlando reported that in the first year (2008) that red-light cameras went online in at 10 intersections in Orlando, Fl., accidents fell 33 percent, from 99 to 66. Rear-end collisions dropped 20 percent, as well, city officials said.

According to a 2011 news report by WFTV Orlando, red-light cameras in Orlando have reduced crashes by nearly 40 percent.

The City of Seattle, Washington reported a 50 percent decrease in violations during the first year of its pilot program with six initial camera sites.

After the City of Gallatin Tennessee, installed red-light cameras in 2006, citations for red-light running are down more than 40 percent and traffic accidents have reduced by 25 percent. Tennessean.com 09.04.08

Accidents are down 11 percent in intersections with red-light cameras in Arnold, Missouri. At one intersection in front of a school, accidents decreased by 50 percent.

During its first year of operation, the City of Florissant, Missouri saw a 51 percent reduction in citations at intersections with safety cameras.

Florida Red-Light Running Facts
In 2009, 62 Floridians lost their lives making Florida the 3rd most deadly state in the nation for red-light running crashes.